The ~80 member Towne Singers is a non-auditioned community chorus based in La Cañada, California. Since being founded in 1987 by Phyllis Winnaman, the chorus has grown to become a well-known source of entertainment for the foothill and valley neighborhoods. Membership is from all the nearby com­muni­ties, and many members commute more than 40 miles to participate in the musical experience.

The Towne Singers take pride in their ability to sing all types of music, and in a wide variety of styles. The group’s musical repertoire includes great classical elements, but these are always complemented with other choral genres, including popular, Broadway,spirituals, gospel, folk, and patriotic.

The full choir performs two or three major concerts each year. In addition, the auditioned Towne Singers ‘chamber choir’ performs in community outreach events, and other social/musical events in the region. 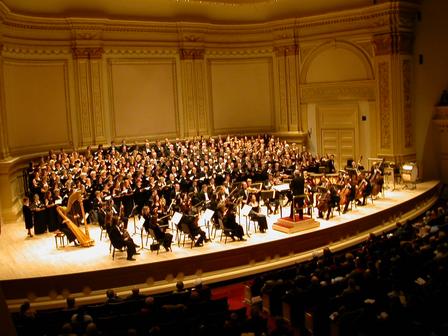 The choir has performed three times at Carnegie Hall, including a 2004 performance of Rutter’s Requiem (conducted by Rutter), and a 2006 per­form­ance of Vivaldi’s Gloria. They performed the Rutter Requiem again in 2010 at the Lincoln Center in New York. The group is often invited to attend festivals and choral events, and toured internationally in 2005.

The Towne Singers have also been honored with citations of artistic excellence by the State of California and the City of La Cañada Flintridge.

The Towne Singers is a non-profit organization that is open to singers of all ages and backgrounds. Each concert season provides a place for people to sing and grow artistically, and to bring excellent choral entertainment to the region.

Some of our early recordings

Listen to I’m Beginning to See the Light

Listen to Bridge Over Troubled Water

Listen to Wade in the Water

Lance Merrill, has been conducting vocal ensembles for over 15 years.  Currently, he conducts the Towne Singers, and serves as Music Director and Worship Leader at Emmanuel Presbyterian Church in Thousand Oaks.  He teaches individual lessons for the vocal students and choirs at Los Angeles Pierce College.  Lance has been the choir director at local high schools in Pasadena, Glendale and Simi Valley, as well as Vocal and Musical Director for high school and community theater productions.

Lance began his musical training as a church organist, and enjoys leading worship, as well as directing the choir at Emmanuel.  He holds a Bachelor of Music degree in Composition, and a graduate credential in choral music education.

Lance and his family reside in Westlake Village.

Ben Mason is a pianist, composer, orchestrator, arranger, and conductor in Los Angeles. He serves as the organist and pianist at First Presbyterian Church of Granada Hills. He also teaches music technology and basic film scoring at Point Loma Nazarene University.
Ben composes for film and other media, and enjoys arranging for choir, band, and orchestra. His styles range from classical to jazz and pop. 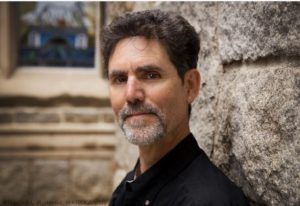 Born and raised in Pasadena, California, Kristopher Wittry has been interested in music from the time he was in young child. At the age of five, he was singing in the children’s choir of the First United Methodist Church and has been singing ever since.

He has been employed as a section leader / soloist at various churches since 1981 and one of his choir directors is quoted as saying that Kris is a “director’s dream: punctual, dependable courteous, generous and kind.”

Kris started performing with the Towne Singers in 1995 and has helped the organization in many ways with stage presence, vocal production, and supporting the bass tenor and alto sections as they learn their parts. He has also helped with makeup prior to the concerts.

Kris plays the viola and is currently with the Pasadena Community Orchestra. 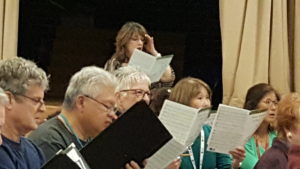 Teresa Parente has been helping the Towne Singers for many years. Along with being the women’s vocal coach she also provides the written Choir Notes after each rehearsal.
Teresa is an accomplished professional singer & actor.   She teaches voice lessons in technique, performance, auditions, and sight-singing.

Some of Our Choir Members